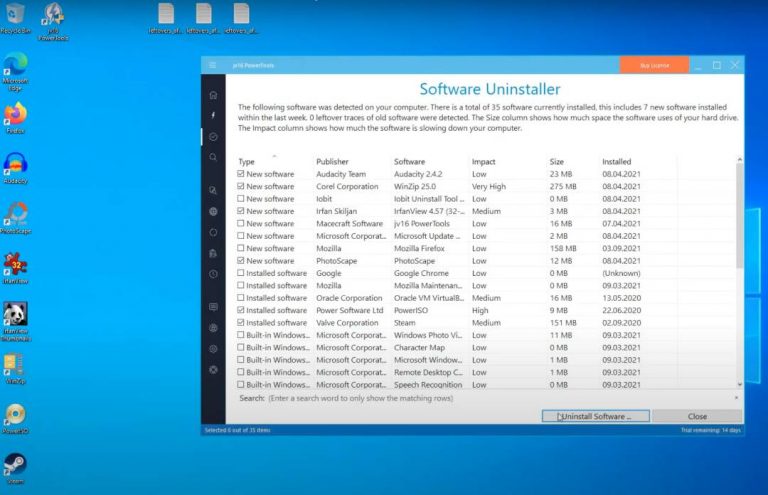 The purpose of this comparison is to evaluate which product uninstalls apps from Windows 10 with the best efficiency.

One could assume that uninstalling something from your Windows PC is trivial: You click the Uninstall button, magic happens and the app has been removed from the system.

What most people don’t know is that when you normally uninstall an app from your Windows, the entire process is performed by the app you are uninstalling. Not by Windows. This also means there are basically no checks to confirm that the app was correctly uninstalled or whether anything was left behind. This is essentially the mechanism why Windows systems get cluttered with left-over data over time.

This is where products claiming to uninstall apps come in. They claim they can uninstall apps better. This is what we wanted to test. We benchmarked the following products:

The products are listed in alphabetical order. The tested versions were the latest available at the time of the testing. Each product was downloaded from its official website. The products were chosen for testing based on their popularity.

How the benchmarks were performed

We installed some common apps to a freshly installed Windows 10. The Windows 10 was fully updated at the time of the testing. The installed apps were: Audacity, IrfanView, PowerISO, Photoscape, Steam and Winzip. These apps were included because they represent popular Windows apps, we are not implying that these software should be uninstalled.

Each of the mentioned apps were installed and the system was restarted. After this, a software uninstaller product was installed and each of the apps uninstalled with it. After this, the system was again restarted and jv16 PowerTools’s Finder feature was used to list any remaining files, folders, registry keys and registry entries. We used jv16 PowerTools for the searching of data simply because it is the only app that we are aware of being able to search both the file system and the system registry with one tool, using multiple search words at the same time.

Audacity, IrfanView, PowerISO, Photoscape, Steam and Winzip were all uninstalled using CCleaner version 5.78.8558. CCleaner does not seem to support batch uninstallation of many apps at the same time. Therefore, all apps were uninstalled one by one. There does not seem to be any kind of automation, uninstalling an app means user must manually click through each step of the uninstaller. To get the best possible result, also all of CCleaner’s other cleaning features were used after the uninstallation of the testing apps.

After uninstalling all the apps and running all of CCleaner’s cleaning features, a total of 80 left-over items from Audacity, IrfanView, PowerISO, Photoscape, Steam and Winzip were still remaining.

The system was restarted, CCleaner uninstalled and all the test apps installed again after each test.

After uninstalling all the test apps with jv16 PowerTools (only the Software Uninstaller was used, none of the other cleaning tools were used), a total of 16 left-overs were detected.

After uninstalling all the test apps a total of 68 left-overs were detected.

After uninstalling all the test apps a total of 48 left-overs were detected.

To show we actually did this testing, here is a screen capture video of the entire test. The testing was done in one shot, without any cuts. The video recording of the test with added sound track and fast forwarding effect for the waiting parts can be watched here:

As we can see from the results chart above, jv16 PowerTools offered the best – but not perfect – app uninstallation performance with only 16 left-overs remaining after the uninstallation process. Revo Uninstaller Pro performed the second best with 48 left-overs remaining and IObit Uninstaller left 68 items behind. CCleaner offered the least cleaning efficiency by leaving 80 left-over items behind. The left-overs mean any files, folders, registry keys or registry entries relating to the uninstalled apps.

We would love to hear what you think about this uninstaller benchmark. Did we forget to include some product? Any other kind of testing you would want to see? Please join the discussion in our forum to share your feedback:

This Windows uninstaller app benchmark with Revo Uninstaller Pro, IOBit Uninstaller, CCleaner and jv16 PowerTools was performed on 8th of April 2021, using the latest versions of each product available at the time. The test was performed by staff here at Macecraft Software, who are the developer of jv16 PowerTools. This constitutes a conflict of interest and therefore one should take this into account when reading this benchmark report. We urge everyone to perform similar testing to verify which product provides the best software uninstallation results.

Between each test, the test applications (Audacity, IrfanView, PowerISO, Photoscape, Steam and Winzip) were all reinstalled and the system restarted. It’s worth noting that it is possible that first tested product(s) may have received an unfair advantage as the system was not fully restored between the tests. The products were tested in this order: Revo Uninstaller Pro, IObit Uninstaller, CCleaner and lastly jv16 PowerTools. For future testing, using an image to fully restore the original state of the testing system between tests should be considered to further improve the accuracy of the testing.

The main purpose of this test is to show how you can test these products yourself. Don’t believe everything you read online. Test yourself. 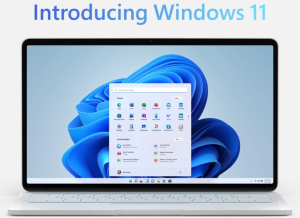