Macecraft software is proud to announce a major update of jv16 PowerTools (version 5.0.0.608).

After building on the same code for over 20 years, we made a difficult decision to take the much loved and used Windows Utility and start all over.

The idea was to strip down to the essentials and to create a new codebase, using the latest technologies and best practices. To improve the overall quality and performance of the tools contained in the application.

A study of the most used features, formed the basis of what would become the new major version of jv16 PowerTools and from quite literally a blank page, a more efficient, laser focused and user friendly Windows Optimization utility began to emerge.

What was initially planned to only take a few months stretched out to over a year, as our small team developed and tested thousands of iterations. Fully supported by loyal customers that helped to aid our development by buying additional licenses, even when they already had current active ones.

After the initial release on Jan 20th 2020, we’ve continued to work hard to develop jv16 PowerTools, based on customer feedback via email, support tickets and our active user forum.

Our number one request from users was to bring back our File Finder and the Registry Finder tools. This is exactly what we did with this new major release: The new version comes with a new tool called Find All, which allows you to easily search your computer for files, folders and registry data

Additional updates include a highly improved user interface, making everything work faster, smoother and with less cosmetic issues of the previous versions.

To further highlight our no nonsense approach to Windows Utilities, we do not bundle additional software, adware or sell on user information, we just get the job done.

We offer a fully functional 14 day free trial version and a 30 day ‘no questions asked’ money back guarantee for all those that purchase a license.

We are giving everyone a new 14 day trial, even if you have used an earlier version before, to allow all those who have not yet purchased a license to try out this improved version.

Each of these licenses give you free upgrades and the right to use the software on up to 5 computers. 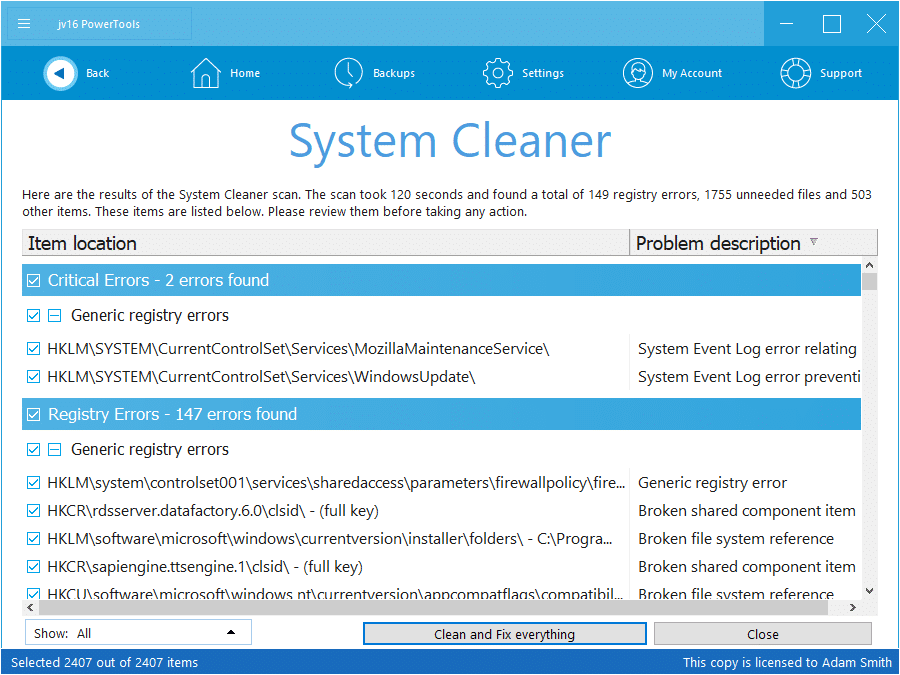 The System Cleaner will not simply just delete everything. That would be an easy way to tell users how much errors or unneeded data is in their system. That would also be very unwise. Instead, we have used our over 20 years of experience in Windows system cleaning to fine-tune the cleaning engine to find the things which are safe to delete. And not only this, the System Cleaner actually finds system errors which it knows how to fix. For example, it scans the System Events Log for errors and sees if it can fix the underlying causes for these errors. 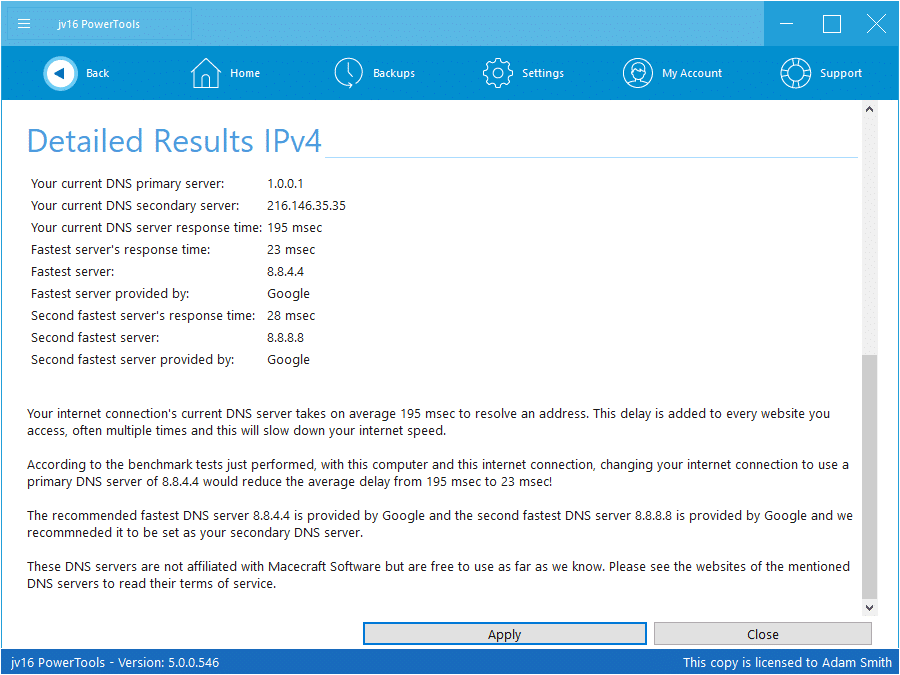 That is why we created the Internet Optimizer: It will benchmark different DNS servers and choose the fastest settings for you. It will also show you exactly how much faster the new settings are.

The result is a cleaner and smoother running Windows PC. 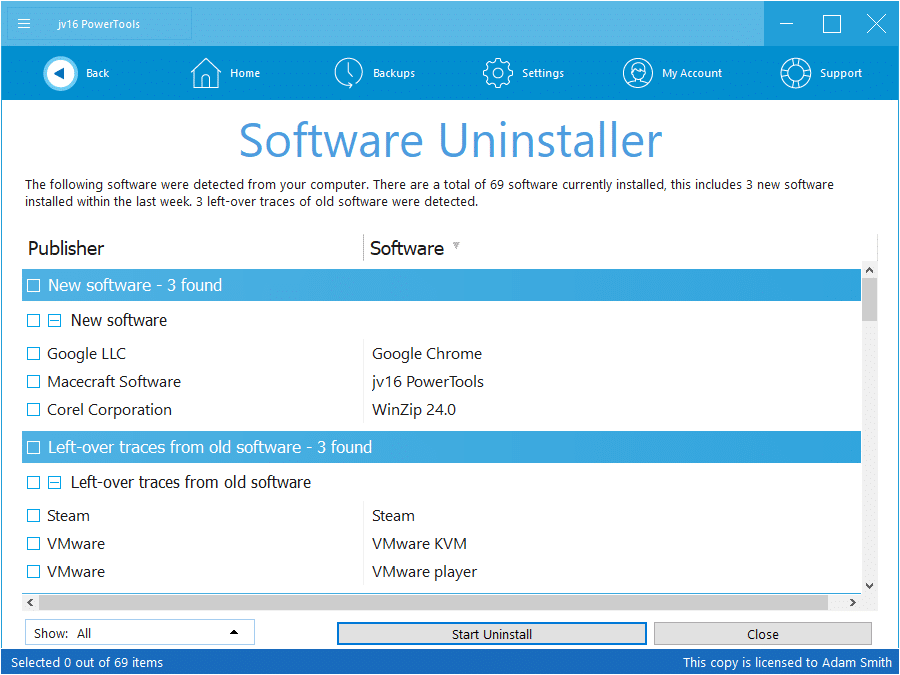 Installing and uninstalling a lot of software is the easiest way to get your computer slow and bloated. If you use Windows Control Panel to uninstall software, it relies entirely on the program you are removing to fully clean up after itself. Most applications perform poorly at this and almost always leave something behind.

Software Uninstaller scans your entire computer, both the hard drives and the Windows registry for installed software and left-over traces of old software.

If you choose to uninstall any software, it will call the program’s own uninstaller and ask it to remove all of its data (exactly the same thing Windows Control Panel does). But unlike Windows, jv16 PowerTools performs a second pass of uninstallation with its own custom uninstallation engine, developed specifically to find typical left-over traces of uninstalled software. 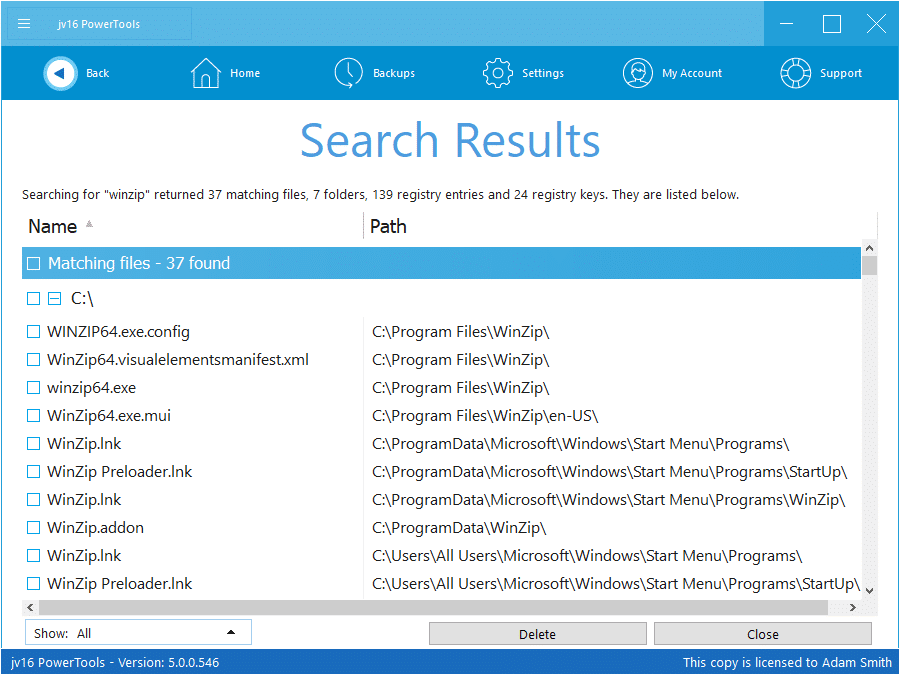 Enter any search phrase or even multiple search phrases, and the Find All feature will list all the matching files, folders and registry data from your computer.

While this feature can be handy in finding, say, a missing document from your system, it has been optimized for searching data of installed software. For example, type in a name of an installed app or a game and this feature will list everything the app has added to your computer.

A powerful feature of Find All is that it allows you to delete locked files in Windows. Even if a file is protected against removal, the Find All tool’s new Force Delete feature can be able to delete the files you want.

In 1998, from the humble surroundings of his bedroom, Jouni Flemming first created RegCleaner. It was a standalone Windows Registry Cleaner, one of the first programs of its type at the time. It soon became a hugely popular way to make Windows 98 work faster.

A more complete Windows utility suite was then conceived in 2001 with all the functions of the original RegCleaner included plus more.

Macecraft Software (Macecraft Inc.) was officially established in 2003 as jv16 PowerTools was converted to shareware to allow the development to become more professional.

Today, Macecraft Software comprises a small, hard working and fully remote team, from Finland, Spain, Romania and Thailand working long hours to be the leading provider of Registry Cleaning and Windows Optimization software for its passionate and loyal customers around the world.