Are you tired of all the useless apps that are on your new computer or shiny new laptop?

They are usually useless and offer no other function than taking up all the already small storage space in your device. This bloatware app problem is an issue that all Windows 10 and Windows 11 users are facing.

The term bloatware refers to all the pointless apps that are on your device. These programs come as previously installed apps on the device, also known as default apps.

They come pre-installed from your developer, bundled in the operating system of your phone or computer, these default apps included the Microsoft windows calculator, the Microsoft Zune video package, and a few others.

These apps clutter your storage and take up much physical space in your disk that could be used in other ways. 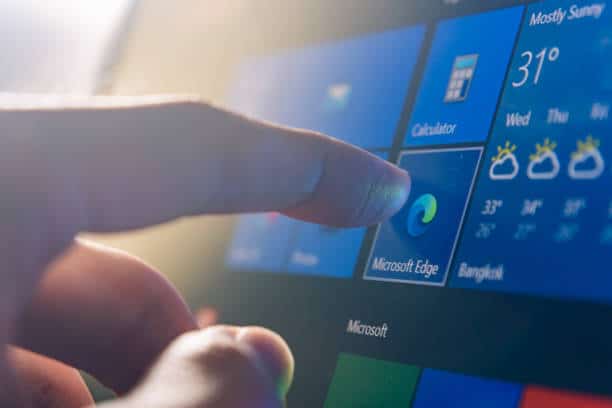 The worst thing is that some of these bloatware apps run on startup which causes the boot time of your computer to increase and slow it down by using up unnecessary memory.

To stop the bloatware affecting the functionality of your computer, developers recommend removing bloatware from windows.

Uninstall Bloatware from the Computer

Removing these oft useless programs taking space in your windows system is easy but your windows is full of them, making it difficult to add anything else. However, you need to do this without visiting your app settings.

As the developers don’t install these apps like your normal several apps. Therefore, they cannot be uninstalled from the Apps & Features folder in your windows settings app configuration management. 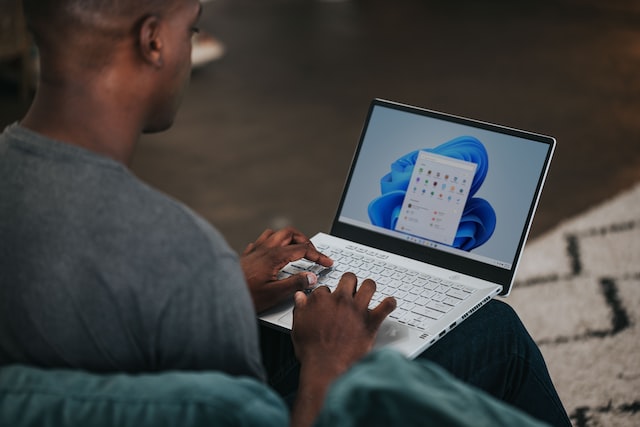 Manufacturers like Microsoft that add bloatware stand to profit from the use of these bloatware applications, which is why, they make it tricky to find and hide them.

However, we have found the easiest, most convenient way to remove bloatware from windows.

These removal methods include PowerShell commands, traditional uninstall methods and third-party installers. so, let’s take a look at how you can also remove apps.

When you open up the start icon, you get a whole list of apps and games, like the Microsoft solitaire collection, you never downloaded in the first place. There is a little difference between Windows 10 and Windows 11 here.

In Windows 10 all these bloatwares are preinstalled apps, whereas in Windows 11 some of the apps are not installed, just present there and install when clicked. 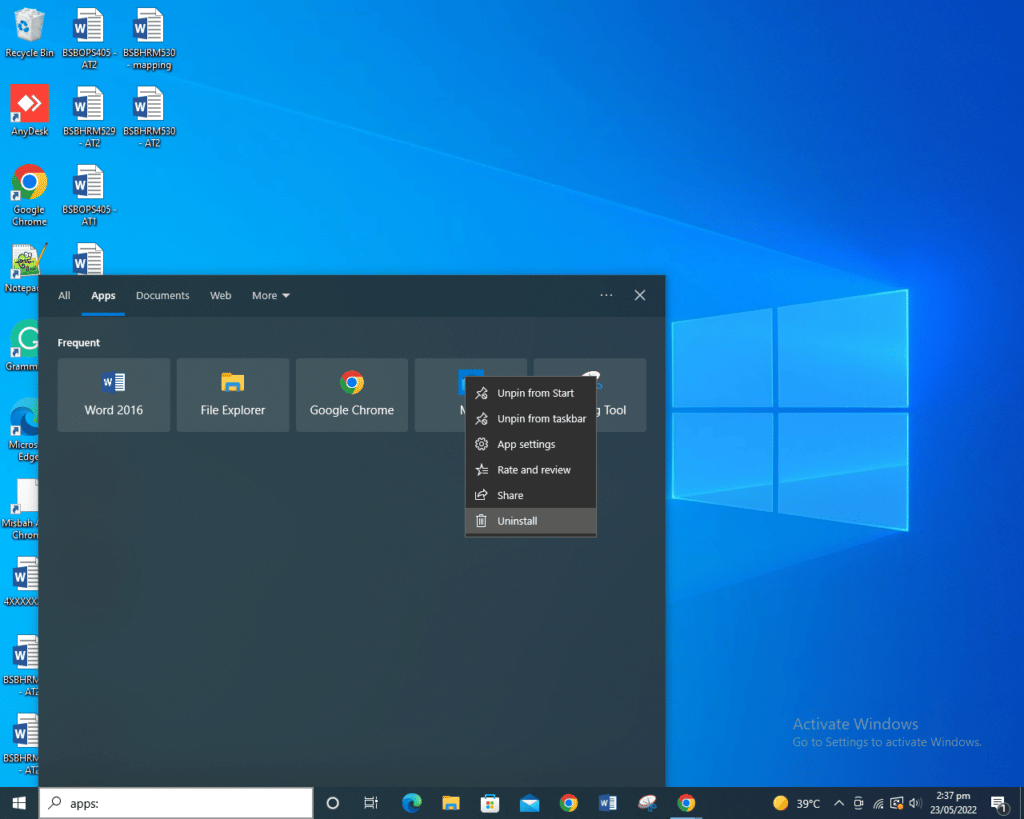 It is quite easy to uninstall these apps from the Start menu search bar, just right click on any app on the menu and when a window pops up with a list of actions you can take, select the uninstall to remove bloatware applications. 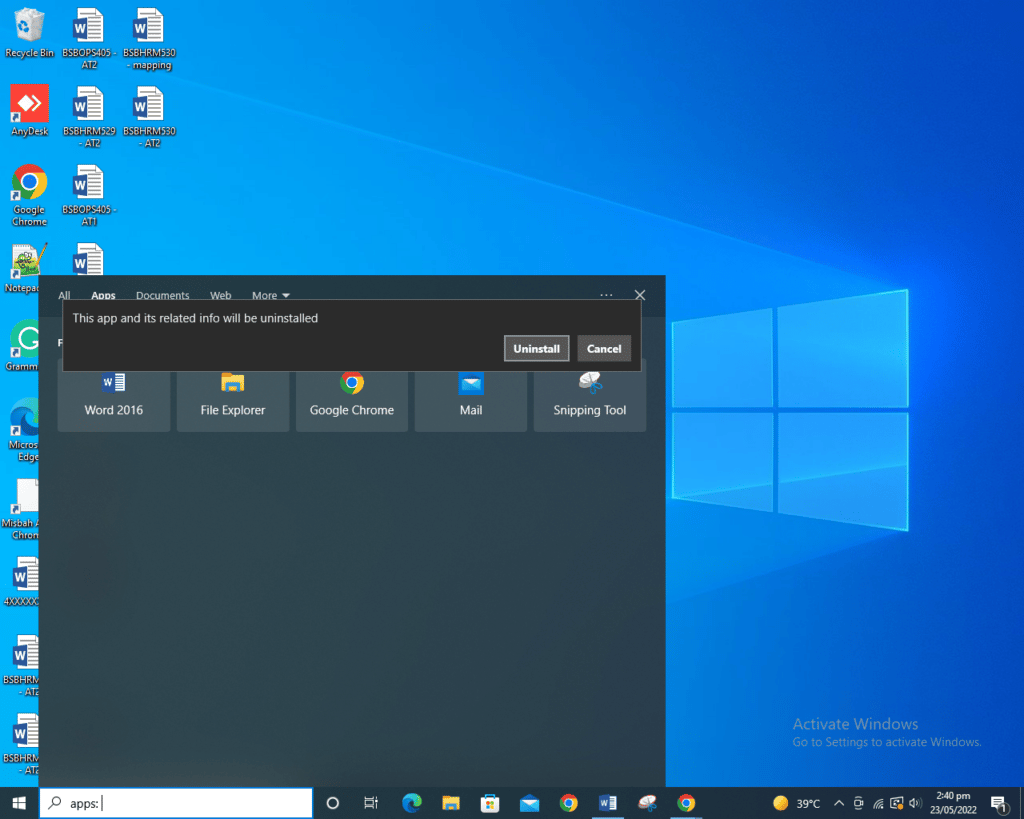 After that, another small window will come up, asking for confirmation about the decision you’re going to make, click Uninstall again and you’ll debloat windows in seconds!

Add or Remove Programs from the Operating System

Sometimes bloatware is hidden from the start icon and it is difficult to locate it. Similarly, there are many other useless programs and software installed in the directory of your PC.

So, instead of looking for them in the throng of applications on your computer, you can take advantage of the built-in utility provided to you, get greater control, and find out the desired location.

In the Control Panel tool of your PC, in the settings app, look for “Add or Remove Programs,” this will allow you to in the windows installation of applications and get rid of them. It is also the best way to track down all the apps present on your computer.

This tool in Windows 11 is in the Apps tab in the settings app, though it works in the same way as the one in Windows 10.

The good news is that it is still present in the Control Panel as well, and in the same interface as the Windows 10.

So, here’s how you can remove bloatware from Windows using this tool:

You can either search for the “Add or Remove Programs” page on the start icon in both Windows 10 and 11, or you can navigate your way to the utility directly in the Panel and look for the “Uninstall a Program.” Once your window opens, you’ll come across a complete list of all the applications that you have installed on your computer. 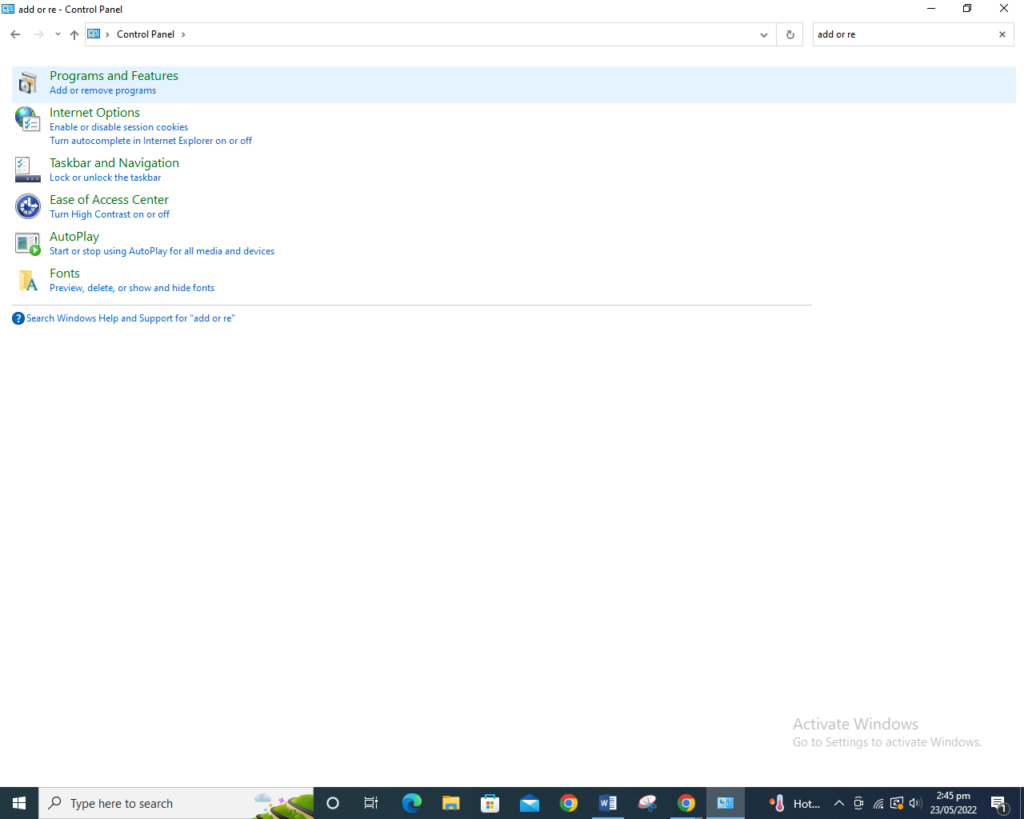 They are sorted in alphabetical order. You can either use another sorting setting to look for your bloatware applications or put a filter to narrow down the list. 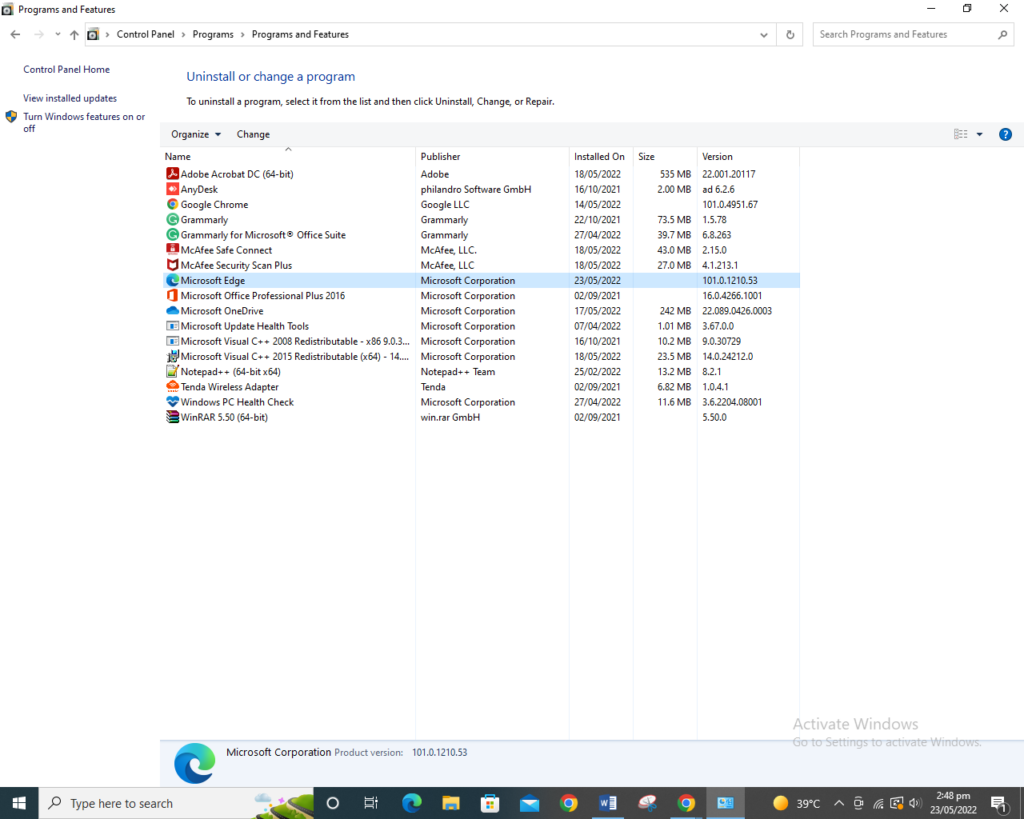 Now that you have access to all the applications, all you have to do is right-click on any application, and select uninstall.

In Windows 11, instead of right-clicking, click on the three dots that you see and then select uninstall.

As the bloatware apps are preinstalled apps, depending on the account permission, a window might pop-up asking if you want the application to make changes to your computer, click on the yes, and you’ll debloat windows right away!

Well, until now we were looking at ways to uninstall third party apps. so, what about the applications and games that are incorporated within windows itself?

They are not available in the control panel and neither can they be uninstalled from the start icon. So, what are we to do?

There’s a solution for that as well, the PowerShell command line and the automated scripting apps. Now, what are they?

Windows PowerShell command-line utility is a tool that allows you to manage your computer with the help of scripts and task automation. It is like a more powerful version of the Command Prompt.

Using this following command, you can remove all kinds of unnecessary applications, even the ones bundled in Microsoft that are usually impossible to uninstall.

Here’s what you have to do:

Don’t know where to get this Windows PowerShell command? Well, just type Powershell in the Start Menu! 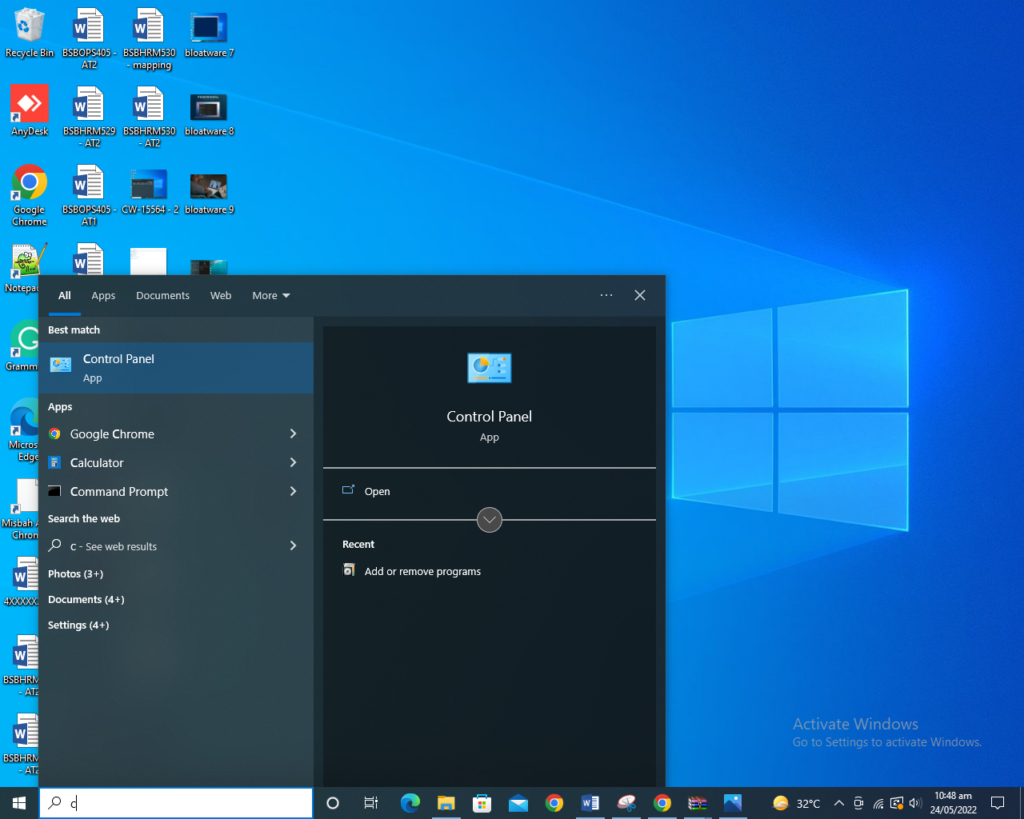 Run this program as the administrator because some commands require administrator privileges. When you click on it, a new PowerShell terminal will appear.

To remove a protected app, the simplest command to use in PowerShell file is to go for Remove-AppxPackage. However, this command only hides the application instead of uninstalling it.

If you want to permanently delete an app, you need to obtain the names of their full packages ranging from 1 to 100. In order to do this, use the Dism command, meaning the (Deployment Imaging Service and Management): “DISM /Online /Get-ProvisionedAppxPackages | select-string Packagename”. This will enable you to get a list of all the packages active on your computer.

Even though the names are going to sound gibberish, your job is to pay attention to the few words in the starting that will help you determine the real names. Bing news and Zune music player is how we know the applications, copy the package names and paste them into a notepad file for now. 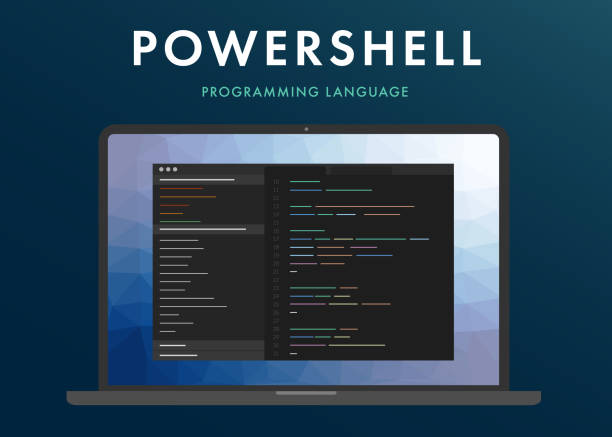 Now comes the time to use the Dism command: “DISM /Online /Remove-ProvisionedAppxPackage /PackageName:PackageName.” This command will replace the package name command and remove the entire system bloatware, operation completes successfully, and also prevent it from automatically installing on its own again!

Sometimes PowerShell Window Commands can seem a little difficult as they require a lot of technical expertise.

Therefore, to help out people with no technical knowledge, an app is much more useful, that takes care of all these additional apps automatically!

Turns out there is a windows10Debloater, a free tool that can remove all bloatware. This includes all the Microsoft apps that are impossible to uninstall. So, it is hosted as a Github repo and is used as a  community-managed tool!

Now you know how to remove all the pre-installed apps on your device, using these tech tips!