Taking screenshots is an essential skill everyone must know.

There are different devices and different operating systems, which all have their own methods to take screenshots. You all may know how to take a screenshot on an Android mobile device by holding the power button plus volume down key together. It’s pretty straightforward on Android.

When it comes to Windows 10 or Windows 7, there is more than one way to do a screen capture. The numerous methods to take a screenshot include capturing the entire computer screen or just a selected part of the window. Screenshots can be helpful for a variety of reasons. You may need it to keep a record, to show someone what’s happening on your screen, or to help solve an error with tech support.

The basic ways include using the game bar, print screen key, and snipping tool. All of them have their pros and cons. Some are faster, but some allow you to capture a specific part or edit it after capturing your screenshot.

Let’s look into each way one by one and discuss their benefits.

What is the keyboard shortcut for the screenshot?

The easiest and most convenient way to take a screenshot in windows is by using the Print Screen Key. This key can be found on the top row, usually beside the F12 key. It may be named PrtSc, PrtScn, PrintScreen, or Print Scrn button depending on the keyboard you are using.

How to take a screenshot by print screen key:

Take a screenshot of the whole screen

By simply pressing the PrtScn button once, the system automatically takes a screenshot of the entire screen. When you press the print screen button, nothing seems to happen, but windows have taken the screenshot of your entire screen and copied it to the clipboard. You can then paste the copied screenshot anywhere from the clipboard, such as an image editor application like Microsoft Paint or any program that supports images like Microsoft Word. You can simply press Ctrl + V to paste.

Take a screenshot of only the active window

Automatically save your screenshot

You may require to take a screenshot and save it automatically. For this, you need to press and hold the Windows key (the button with the Windows logo) and then press the PrtScn key to save the entire screen as an image. This image can be found in the Screenshots folder, which can be found in the Pictures folder. This procedure is useful when you want to save your screenshot in a folder for later use. You can anytime access the pictures screenshots from the screenshots folder.

All of these methods are applicable to both windows 10 and windows 7. They both have the same features regarding when taking screenshots with print screen.

How to take a screenshot by Game bar:

The game bar or Xbox game bar is an overlay that can be used to capture screenshots or record videos. The tool is already preinstalled on Windows and works on almost all games, apps, and software.

You can enable the game bar by typing “Enable Xbox Game Bar” from the Windows search bar then toggle on record game clips, chat with friends, and receive game invites. 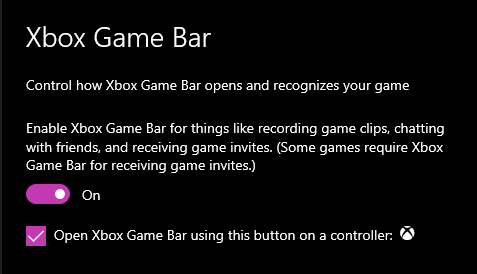 Here’s how you can capture a screenshot with the game bar.

Step1) Bring up the desired window, game, screenshot screen or application of which you want to take a screenshot.


Step2) Press and hold the windows key, and then press “G”. The game bar overlay will appear.


Step 3) Click on the camera icon, located on the top left side, under “Capture.” This will take a screenshot of the active window. The shot screen and video clips captured will be saved in PNG file format. You can find them in the “Captures” folder located in the “Videos” folder. This does not copy the pictures of the screenshots to the clipboard.

You can also take a screenshot of an active game screen by pressing the windows key, the Alt key, and then the PrtScn key together. Taking a screenshot using the game bar with this keyboard shortcut is much faster.

How to take a screenshot by Snipping tool:

Though Snipping Tool isn’t available on the list of apps accessed in the Start menu, you still can look for it on the Search bar. Let’s see how the snipping tool works.

Step 1) Make sure you’re on the screen of windows, app, or software which you want to take screenshots of.

Step 2) Run the snipping tool from the start menu.

Step 3) Under “Mode”, select how you wish to take a screenshot.

Step 4) Proceed by clicking on “New.” Your current screen will freeze, and you can freely select part of the windows, by dragging the cursor. Once you have selected it, you will be returned to the Snipping tool window.

Step 5) Now you can either copy the screenshot to the clipboard, or you can save it to your desired directory. 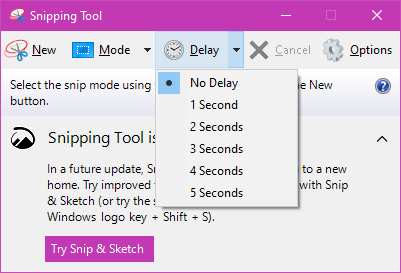 How to take a screenshot by Snip & Sketch:

Snip sketch is another software that comes preinstalled on the latest version of Windows 10. This software was not preinstalled on the older versions, but if you update windows, you’ll find the snip sketch software. This tool gives you more flexibility when taking a screenshot. With the snip sketch, you have ether option to annotate your screenshot before saving it. Let’s see how it works.

Step 1) Open Snip & Sketch from the Start Menu. You can also use the keyboard shortcut of the Windows key (the button with Windows logo) + Shift + S to open the Snip & Sketch tool.

Step 2) Click on “New” on the top left corner of the windows.

Step 3) The current screen will freeze, and you’ll find a small menu bar on the top. From the bar, you can choose your desired options if you want a rectangular snip, free form snip, window snip, or a full screen snip. Proceed by highlighting the area you wish to snip by dragging the cursor or capturing the entire screen.

Step 4) The captured snip will be copied to your clipboard and shown in a notification panel on the bottom right corner of your screen. You can paste it to drawing tools like Microsoft Paint with the keyboard shortcut Ctrl + V. You can also simply click the notification panel and the snip will get loaded to the snip sketch window. 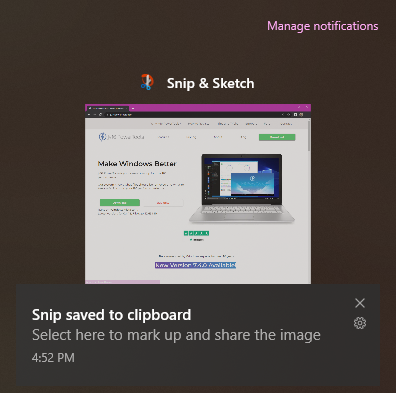 Step 5) Here in the snip & sketch window you can annotate the snip with different options.

Step 6) Finally when you’re ready, you can either copy the snip to the clipboard, or you can save it as an image to your desired directory.

As you can see, there are various ways to take screenshots, with each method having different benefits. Why not try out each of our listed procedures, so you can determine the most efficient workflow to take your screenshots.

If you’re a regular screenshot taker, it’s very easy to accidentally create duplicate screenshots. Those can quickly pile up and take up your memory space, especially if the size of your screenshot files is big.

With the Duplicate Finder feature from jv16 PowerTools, you can quickly find accidental duplicate files of your screenshot. The feature also offers customization options for better search results. Feel free to sign up for a 14-day free trial and take advantage of the feature today!

What Our Customers Say

Always an amazingly fast response to enquiries and with a positive attitude rarely shown in other services and providers.

Well done – and keep up the development!

Using jv16 since virtually ever, there’s little other to say about it apart from that it’s a marvellous tool for keeping your system at peak.

Not much arguments for not using it.

The responses to support questions I’ve received have come promptly, accurately and courteously.

No hassles and no waiting on the phone, wading through a phone tree of interchanges!

Best DNS Servers to Use for Free in 2022

jv16 PowerTools is one of the best tools for Windows.

I have been using this tool for more than 10 years and it keeps my laptop in top condition.